Where is it? What is it? 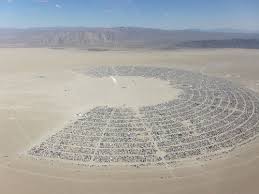 “Burning Man is a week-long annual event held in the Black Rock Desert in northern Nevada, in the United States. The event begins on the last Monday in August, and ends on the first Monday in September, which coincides with the American Labor Day holiday. It takes its name from the ritual burning of a large wooden effigy, which is set alight on Saturday evening. The event is described as an experiment in community, art, radical self-expression, and radical self-reliance.”. 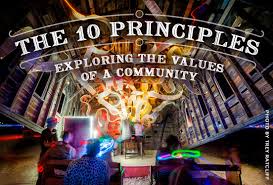 “Once a year, tens of thousands of participants gather in Nevada’s Black Rock Desert to create Black Rock City, dedicated to community, art, self-expression, and self-reliance. They depart one week later, having left no trace whatsoever. Burning Man is also an ever-expanding year-round culture based on the Ten Principles.”

How long has this been going on?

In 1986, or so the story goes, a California man named Larry Harvey was suffering after the breakup of a relationship, and decided to go to the nearby beach to think and process. He ended up having a small bonfire on the beach, where he burned mementos and a small effigy, symbolizing his acceptance of the end of the relationship, where to his surprise, people started to gather around him singing and dancing and providing a comforting little community as he said his goodbyes.  This inspired Harvey to repeat the experiment in temporary community the following year, and then onwards, eventually growing too large for the California beach. It was eventually moved to a piece of land in the Northern Nevada desert, Black Rock Desert, where it has grown and morphed every year into the gigantic festival it has become today. In 2013, more than 61,000 people attended.

In 1998, I had purchased a new computer, and was busily getting to know the ins and outs of that vast online playground known as “The Internet”. To that end, I was quickly and heavily hooked on playing online Bridge in Yahoo! Games (does anyone even do that anymore?), and while there I met a great bridge partner. He called me a smartass, I’m sure I called him some names too, and a friendship was born!  When he mentioned that he would be going away for a few weeks during the end of the summer in 1999, I asked him where he was going.

He replied that he couldn’t tell me.

Well, anyone who knows me knows that’s like waving a red flag in front of a bull, so I pestered him until he told me he was going to an “alternative arts festival” in the Nevada desert.  For a week.

Now I *really* wanted to know what it was all about, as you can imagine, but again, he replied he couldn’t tell me.  Frustrating!  He must have known that my insatiable curiosity would be the one thing that would break me out of my complacent, somewhat boring little shell, and essentially have me buy a ticket to another country, to a state I’ve never been, to spend a week with people I’ve never met before, to go to a festival I had never heard of before that moment.

Yes, it’s been said before; I must have a horseshoe up my bum. This could all have ended so very badly.

I took a (huge) chance, and in doing so I honestly believe that I significantly changed the direction of my life.

How many years I’ve gone

I participated at Burning Man for seven years, between 1999 and 2005. I plan on going back again this year, hopefully with my husband, who has only gone once himself (our love story of how we met is for another post, another time, but it does involve Burning Man!). We have mutual friends who have gone pretty much every year since I’ve known them, so my seven year stint is nothing in comparison to their epicness!

The friends I’ve made there

I love the friends I’ve made at BMan; many of them are so far-flung that I don’t get to see more than that one week a year that I’m at the Burn, but the cool thing about Burner friendships is that you can pick them up right where you left off. As for my local, homegrown Burner friends, the funny thing about that is I made these friends *after* my first year at Burning Man. I’m not kidding when I say I went to my first Burn not knowing a soul. Now I have tons of Canadian Burner friends from Toronto to Ottawa, and a few who are as far away as London, Ontario (that’s in the west end of Ontario for you non-Canucks). My non-Canadian Burner friends range all over the map, but most of them are in the California area, with several also in Missouri, Michigan, and a special friend in Mass.  I’m sure I’m missing some places, too.

When you experience a mind-blowing festival like Burning Man, it’s no wonder that your perceptions may become altered, your priorities may change, and your emotions may become intensified.  It’s a hell of a trip. Being “on playa” (Spanish for “beach”, playa is BM’s term for the arid desert in which the festival is situated) means you automatically join this community of amazing people who give without taking, smile and laugh without calculation, and express themselves freely — and many times bizarrely — to their heart’s content, without fear of judgement or censure. I consider it “letting our freak flags fly”.

One of the major differences is that, with a very few exceptions, there is nothing to buy or sell on the playa. Other than being able to purchase ice for your coolers, an RV grey water pumping service, and one non-profit central cafe that sells coffee drinks, there is no mercantile commerce. You need to bring everything you will need to survive in a harsh desert environment for a week, from basics such as water and food, to filter masks and goggles for the invariable dust storms that roll across the playa on a moment’s notice.

Burning Man LLC has come up with a nifty Survival Guide, updated every year, for First Timers and those who need refreshers on how not to die in one of the least hospitable climates in the world.

It’s no wonder that after steeping ourselves in such a different environment for an entire week, 24 hours a day, sometimes re-entry into “normal” society can be a bit jarring.  Making the transition back into your daily life is widely known as coming back to the Default World, as this is where we spend the other 50-odd weeks out of the year. I have personally noticed that I respond differently to people, I act differently, and I see things in a different way when I come back; it often takes several weeks, if not months, to reintegrate. Some people never do reintegrate, and end up changing their entire lives over what they’ve seen and experienced.

Conversely, when it’s time to go back to Burning Man, we usually call it “coming home”.

What I did there, and why I go back

Well, some of that I will leave to fervid imagination (although I’m a pretty good girl, regardless of how weird I may look/act on the outside, heh), but I will say that every year I went, I fully participated (or as they spell it, pARTicipated!). In fact, save for one year I was staff, I volunteered a great chunk of my time every year to one of the “infrastructure departments”, for lack of a better term.

In the times I was off-shift, I spent hours upon hours in the daytime and nighttime exploring Black Rock City. I have seen jaw-dropping art projects of innumerable shapes, sizes, and themes; I have cried, laughed, groaned, shook my head in disbelief, screamed, and lost my marbles (sometimes all at once) over some of the experiences I have had, both alone and with friends old and new.

As to what those experiences are, I think I’ll take a page from my long-ago friend who first introduced me to Burning Man; I can’t tell you.

It’s not that I’m trying to be a smart-ass (though that’s always a possibility); it’s simply that my experiences are filtered through my own psyche and personality. That which turns my crank, so to speak, wouldn’t necessarily turn yours.  So, to tell you about my experiences might make you think, laugh, cringe, say “meh”, or even shudder. What I t

ell everyone who asks me, “What should I expect when I get there?”, I tell them this: whatever you think you’re going to find, you will find. If you go in with a bad attitude and expect to see licentiousness and bad behaviour all around you, then that is only what you will see. But, if you go to this festival with an open mind, a caring heart, and a willingness to learn and absorb from others, then you will have a life-changing experience!

You get from it what you bring into it, essentially.

All the following photos are copyright of Burning Man LLC

Fun food that's a snap to make! Easy recipes from cocktails and appetizers to main dishes and desserts!

Live a fulfilling life free of deprivation and full of nourishment.

A blog devoted to achieving ultimate health, wellness and happiness.