As I posted in a previous blog, I’m a Scouts Canada Beaver Leader.  Tic Tac is my name, and making learning fun for kids is my game! *cue wide manic grin and creepy giggling*

…sorry, it’s been a loooong-ass week.

Our amazing and fearless Section Leader, the previously mentioned Erinith, has been ensuring our new Beaver colony (all new kids this year!) is up to Scouts Canada standards; to that end, she has instituted a “theme” for our colony’s year, which is Zoo Animals.  This essentially means that one session a month, we dedicate to learning some interesting facts about a particular Zoo Animal; this is intended to culminate in an end-of-year trip to the Toronto Zoo, where they can see at least some of the animals they learned about over the program year. This past Thursday evening was our first Theme night, and we taught the kidlets All About Beavers! (ahem).

Erinith found an old Ojibway myth about how the beaver’s tail became flat, and we had the brilliant idea to make little felt puppets of the animals mentioned in the story, so one of us could read the story, and the other could act it out using the puppets.

It went swimmingly, and we’ve decided to make it an ongoing part of the monthly themed meetings, with us making new finger puppets of the animals we learn about.  But the best part of our brilliant plan is our “secret”: since it takes not that much longer to cut out pieces for several finger puppets as it does for one, we’ve decided to quietly make enough finger puppets of the monthly theme animals for all the kids in our colony, hold on to them until the end of the Scouting year, and then present them to the kids as a full set, in a cute little felt satchel, as a “thank you!” for being with us for the year.  Awesome, eh?

So enough yakkity yak; here’s how I made these adorkable little guys! 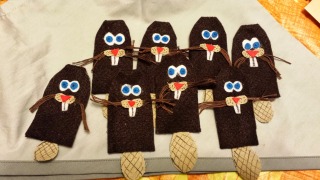 Cut out all the pieces for as many finger puppets you will be making; it’s more efficient to have them all cut out in advance!

For the beaver body, the design I decided to go with was to measure my own finger against a length of the brown felt, then double it over with a titch extra length and width on all sides in case of a bad cut. I then trimmed the sides and bottom while folded over and added a gentle rounded end to the top folded end, without cutting all the way through.

For the eye whites, I cut small rectangles approximately the same size, then folded them over and cut out a “goggle” shape from each rectangle. I did the same thing with the light brown “cheeks”.

For teeth, I cut out very small rectangles in keeping the the general size of the beaver face, then snipped one end slightly pointier than the other (like an unfinished triangle), The narrower end points downwards.

For the irises, I chose a deep blue, but it can be any colour. I cut small rectangles, folded them over, then cut out two small irises from each rectangle, making sure they were completely separate.

For the nose, I cut very tiny triangles out of red felt.

For the whiskers, I looped brown embroidery floss/thread around the palm of my hand several times, then snipped the loops on both ends to make several strands of “whiskers”. I used four strands for each puppet.

Lastly, I cut out the flat beaver tails by roughly measuring my thumb against some light brown fabric, cutting out rectangles to that size, then hand-cutting each tail from the thumb-length of fabric.

You may decide to put ears and paws on your beavers; the choice is yours.

Glue on the tail to the inside of the back body piece first.

Flip over the body piece, and begin affixing the facial features.

Whites first, then glue on the irises.

For the rest of the facial features, glue the whiskers and the teeth on first.

Glue on the cheeks,

Then add the tiny nose triangle.

Hot glue the back to the front from the inside, making sure not to seal the opening for your finger. Let it rest for a minute, then check to ensure it is well-glued in the right places (if you’ve made a mistake, you may need a sharp knife at this point to separate the glued felt).

All that’s left to do is use the marker to add the special touches, such as pupils, cross hatching on the tail, and dots on the cheeks.

Enjoy your little finger puppet beaver!  Make a whole zoo’s worth of little animals and enjoy a fun, cute little menagerie of felt friends you made yourself.  I’ll post updates with new felt friends as I make them over the next several months; so far, I also have a yellow bird and a muskrat (pics for those to come!)

Let the ingredient be your inspiration!

Where travel gets weird

Lifesfinewhine
Art at the push of a button

A blog full of humorous and poignant observations.

The Movie My Life

All About Writing and more

Simplifying the transition to a Plant-Based Lifestyle with Recipes, Resources, and Cooking and Travel Tips.

How I Cook — by Graham Stewart

Marvellous Recipes
Wish I Were Here

Journeys Through Place and Time