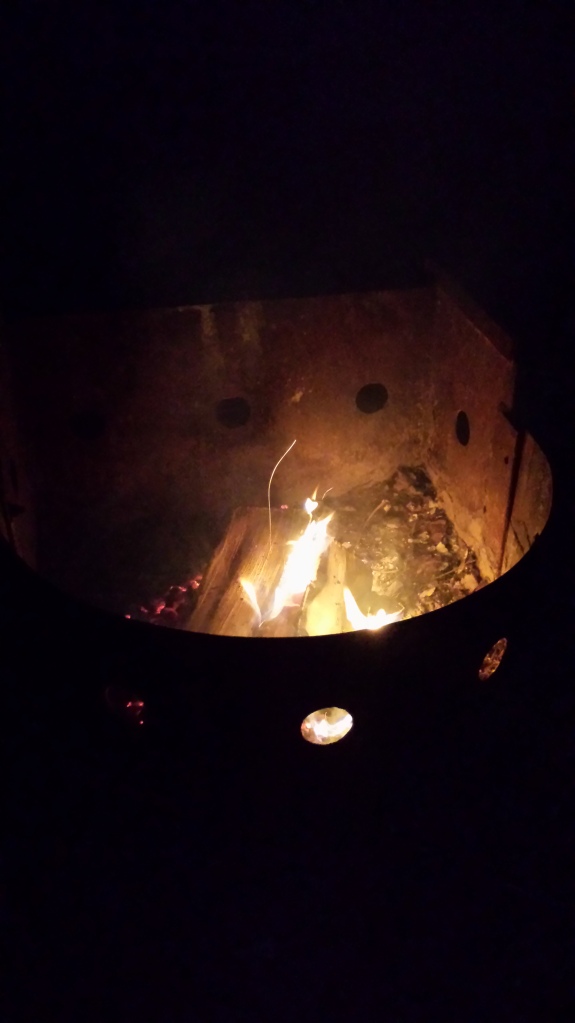 I distinctly remember the Friday before I left on my Great Algonquin Adventure, my boss asking me about my vacation plans. When I mentioned where I was going, she asked in a concerned fashion if I had checked the weekly forecast for the region. I admitted I hadn’t, as I didn’t want to see bad news that would make the Hubster and I rethink our plans.

Maybe I should have anyway.

Saturday’s weather for driving up and setting up camp was gorgeous; hot, sunny, crisp and perfect. We got in for mid-afternoon, and had everything set up by late afternoon. With the exception of the ubiquitous mosquito and blackfly population, we were the proverbial happy campers. Sunday morning and early afternoon looked to be much of the same, so we took a drive down to Canoe Lake resort area for a look-see and lunch, and while we were there, went into the camping outfitters/tuck shop for a few forgotten items. There, posted for all to see, was the weather forecast for the week.

Rain, winds, high risk of thunderstorms, starting as early as later that very afternoon. Continuing on every afternoon and evening to Friday, with a possibility of tornado activity in the region thrown in for good measure.

The forecast was hard to believe, with such beautiful sun and heat blazing down on us, but we decided to eschew the rest of our planned activities that afternoon and go back to the campsite to batten down the hatches just in case. We whipped out the newly-purchased emergency radio (see previous post, lol) and double checked the weather with the emergency band. Yup. confirmed. We were going to get rained on, but good. We did what we could to secure all of our stuff, in the event that high winds came up and tried to mess with us; we also rearranged the inside of the tent and dragged the camp chairs in, so we would have somewhere else to sit other than the air mattress.

And oh boy did it come down. As we hurriedly made preparations for a Big Blow, we watched the gigantic thunderheads roll in over the formerly clear skies, the light die down, and the wind hush, just like it does in the movies. We were treated to multiple storms all afternoon, evening and overnight, with some pretty impressive thunder and lightning. It was also about then that we found out our tent leaked. Good times.

When the next morning finally rolled around, we had a long discussion about whether we should “fish or cut bait”; would our our poor, leaky little tent and our rapidly eroding good humour be able to hold out for five days of thunderstorms and potential tornadoes?

Simply put, as vacations are precious, and we were simply NOT having a good time, 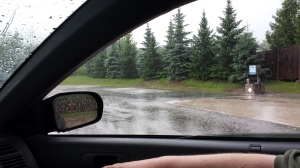 we made the hard decision that it was the right decision to pack up and come home. As you can imagine, it’s easy to second-guess your decision when you’re packing up your stuff, less than 48 hours after you had unpacked it all, in beautiful sunshine and perfect weather…but we knew that the bad weather was coming back, and maybe this time we wouldn’t be as lucky as to have just a little tentular leakage. It was sort of a sour victory that the promised rainstorm came down just as we stopped in the town of Huntsville (about an hour outside of Algonquin Park) for gas and a bite to eat on the way home. Windy sideways torrential rain and thunderstorms — woo doggies, them’s some fun times right there, letmetellyou…

At least we got a few nice pics of the park, between rainstorms.

Ah well, we are safe and sound at home now, and have had the time to do some fun day-trip stuff for the remainder of our vacation days: we’re considering the Ripley’s Aquarium, the AGO or the ROM, and I’m personally voting for a little go-kart action at Polson’s Pier… ;o)

Maybe the next vacation will be a little more forgiving!

Live a fulfilling life free of deprivation and full of nourishment.

A blog devoted to achieving ultimate health, wellness and happiness.