The reason I was up visiting family last week was because of my nephew’s birthday party. I really like to make his birthday cake, since I consider it an act of love and service for my whole family (they really do love my baking!). His mum and I were still working on Halloween themes for his birthday since the party was so close to the actual day this year, but I’m sure as he gets older and can start demanding his own themed birthday party idea (“Dinosaurs! Trains! Batman!!!”), the Halloween themes will likely die a quiet death.  In the meantime, though, I’m reveling in the fun that is making an annual Halloween-themed cake that’s not scary but fun for all the little carpet rodents who attend the party…and their parents, of course!

Well, as promised, here are the photos of the cake I made for the party, all by my lonesome this year. I’m reasonably pleased with it, though of course I can see tons of mistakes that even a liberal application of candy corn cannot hide to my trained eyes (although I tried, oh boy did I try!).  Have a look at the inspiration pic and my final design, and judge for yourself.

This was the inspiration cake i took my ideas from, found after a painstaking search of hundreds upon hundreds of Halloween cakes that would be suitable for a 2 year old’s birthday party and not too taxing on the decorator (i.e. moi).

For my own version, I needed to switch the heads around to opposite what the inspiration cake showed, as I had made a 9″ spice cake with vanilla-strawberry buttercream on the bottom — my sister’s personal request — and a 6″ chocolate cake with Lindt chocolate buttercream on the top. I had purchased pre-coloured fondant I bought for the occasion, but it actually came *flavoured* as well; the green was green apple flavoured, and the orange was orange flavoured. I figured that chocolate and orange go well together, but I didn’t think that green apple and chocolate would be a nice flavour pairing!

So anyway, here is my take on the inspiration cake:

A lot of fun to make, and I received a lot of compliments too!

These were the only two shots I was able to capture of the chocolate cake post-cutting:

And the one sad little shot of Frankie’s cheek: 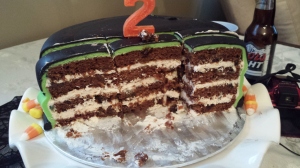 Made of spice cake and buttercream, of course. When I am home again later this month, I’ll be sure to post the recipe and tutorial for my awesome spice cake, also known as a Spanish Bar Cake. You’re welcome.

Lastly, a protip I didn’t know about until this week: I’m not a huge fan of candy corn, yet I always seem to end up with some in my home after Halloween every year. Apparently, you can make your own Butterfinger Bars using only three ingredients…one of them being candy corn.

In any case, I hope you had a great Halloween! :o)

Family cooking & baking in France, living the life one delicious meal / cake / biscuit at a time.

................... for lovers of ice cream. Your free on line magazine for sweet frozen treats. Recipes, inspiration, artisanal ideas for your delectation.

“My Food Trolley” is all about making your food exquisite, delicious and easy to cook.

Some coffee, a keyboard and my soul! My first true friends!

I hope that someone sees this page and decides not to give up...

Simplicity in food and travel

Stories of our son, Incrediboy

Donald on Dining in and Out.

vegan recipes, books and festivities... Among the trees in Scotland.

Delicious recipes from me to you