Yay! I finally get to post about this delicious Creamy Chicken Vegetable Pasta Bake (dang that’s a long name!), as we finally cracked one open last week when I wasn’t feeling up to cooking due to YET ANOTHER BOUT OF THE FLU. This episode was brought to me by the letter Q, the number 4, and my delightfully sneezy-wheezy bro-in-law, rather than my adorable yet germ-ridden toddler nephew.

Granted, it’s a little over-baked in this photo (what I get for having my hubby man the oven while I took a wee nap), but it was still delicious! I would only tweak a few things about this recipe were I to make it again; firstly, the pasta was slightly overcooked with the second heating in the oven, so I would only par-boil it before assembling (this change has been reflected in the recipe below). Secondly, while the spices were perfectly fine when it was originally made, they mellowed out a little too much for our liking, so I would add more of everything, probably about half again the amount of spices if you were to make this for freezing (again, I’ve updated the spices below). Oh, and some hot sauce! yeh yeh yeh….  Otherwise, it was delicious, and with a side salad or steamed veggies like we did, it’s a great, filling meal. 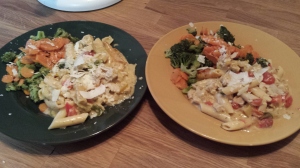 In a large pot of boiling, salted water, cook pasta a few minutes short of al dente; drain pasta, and return to pot. Coat pasta with 2 tsp olive oil to pasta to prevent sticking, and set aside.

In a large nonstick skillet, heat oil over medium-high. Season chicken with salt and pepper; cook until opaque throughout, 3 to 5 minutes. Remove and set aside.

Whisk flour into milk and combine completely; add slowly to vegetable mixture and bring to a simmer, mixing frequently.

Add chicken and pasta to pot; season mixture with spices, salt and pepper to taste.

Add cheeses and combine thoroughly. Heat through in pan for 1 minute longer, then divide pasta mixture between baking dishes.

Bake, uncovered, until top is golden and bubbling, about 25 minutes. Let stand 5 minutes before serving.

To Freeze: Prepare up to before baking step; let cool. Cover tightly with foil, and freeze, up to 3 months.

To Bake From Frozen: Preheat oven to 400˚F, and bake (still covered in foil) on a rimmed baking sheet until center is hot, about 1 ½ hours. Remove foil; bake until golden, about 15 minutes more.