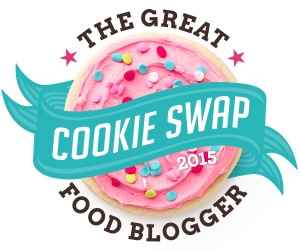 *My apologies to anyone who sees this as a re-post; I didn’t program my scheduler correctly, and this post went live a week early for several hours before I noticed and pulled it back out. Sorry!*

Yay! My cookies have been mailed out (and hopefully received by my swap matches), and now I can post about my delicious recipe! Many thanks and a huge Shout-Out to Love and Olive Oil and The Little Kitchen for pulling off another near-impossible feat of voluntarily coordinating the 2015 Food Blogger Cookie Swap! We love you guys! ❤

As I mentioned previously, I had a challenge this year (I think the more challenging recipes just *find* me…); I had to come up with a Vegan, nut-free cookie. Because this annual challenge has a caveat, in that the same recipe with the same ingredients must go to all three of your matches, I was concerned that whatever I made, while meeting the requirements for one of my matches, would not be as tasty for the other two.

So, how was I going to come up with a Vegan recipe that was good enough to send to the other two non-Vegan, non-nut-free bloggers that they wouldn’t mind missing these components?

Let me tell you, I really worked on this one, guys. I researched all the recipes I’ve saved over the years that even hinted of vegan cookie substitutions. I pored over giant piles of cookbooks. I practiced my Google-Fu until my eyes crossed and my brain revolted. And when I was about to despair, I remembered  my tiny little book given to me by my sister a few years ago as a Christmas present, Vegan Cookies Invade Your Cookie Jar, by Isa Chandra Moskowitz and Terry Hope Romero. Let me tell you, these Vegan bakers have some serious game. I found a recipe that called to me from that book (Coffeehouse Hermits) that solved my nut free conundrum, but, lest it be too similar to previous biscotti recipes I have made in the past, I changed it up quite a lot to suit my skill set, my somewhat zany personality, and my ingredients on hand!

The feedback on these little bites of delight has been uniformly positive, by the way; most recipients are simply amazed that they’re vegan (aww, shucks!)…

Don’t be intimidated by the long list of ingredients and the fact you have to use four bowls; it’s actually a pretty easy recipe that doesn’t require any other tools than a whisk and a couple of spoons or silicone spatulas, and it comes together beautifully.

So seriously, try this recipe soon and see for yourself! 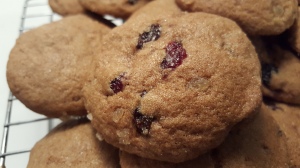 I’ll tell you what you want,

What You Really Really Want…

These Ginger Spice cookies are awesome with coffee, tea, hot chocolate, or a shot of Kraken Spiced Rum — or whatever floats your boat at 9am. You can dunk them or eat them all ladylike, pinkies up and crinoline a-twirling. I won’t judge.

Combine the cranberries, raisins, and minced crystallized ginger in a small bowl. Set aside.

In another bowl, whisk together the hot water and espresso powder until it has completely dissolved. Let cool to room temperature.

In a third bowl, whisk together the oil, molasses, cooled espresso, grated fresh ginger, and 2/3 cup sugar until thick.

In a fourth large bowl, sift the flour, baking powder, baking soda, cinnamon, allspice, powdered ginger, pepper, and salt, and add in all at once to the wet ingredients. Fold the dry ingredients into the mixture with a mixing spoon or silicone spatula until almost fully moistened, and then fold in the dried fruit mixture until a soft dough forms.

Chill the dough in its bowl, covered, in the refrigerator for about 30 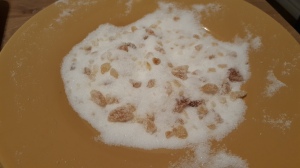 minutes. Pour the remaining cup of granulated sugar onto a flat plate for rolling. (At this point, you can add any of the leftover ginger crumbs from mincing the crystallized ginger to the rolling sugar).

Meanwhile, preheat the oven to 350°F. Line two baking sheets with either parchment paper or Silpats.

Once dough is chilled, scoop tablespoon-sized amounts of dough and plop on baking sheets. Once you have 12 or so scoops per sheet (depending on the size of your baking pan), moisten your hands slightly, and roll each dough scoop into a ball, then roll the balls around the flat plate of gingered sugar. Coat all sides. Evenly space sugared dough balls on each baking sheet, about 1½-2 inches apart, and take a small flat-bottomed cup or dish and gently squash each dough ball to a flattish circle (I like to dip the bottom of the dish in the sugar first to ensure it doesn’t stick to the cookie balls).

Bake in oven for 13-15 minutes, rotating trays at the 6 minute mark. Remove from oven and let cool for 10 minutes on trays, then move to a wire cooling rack to cool fully. Store in airtight canister. 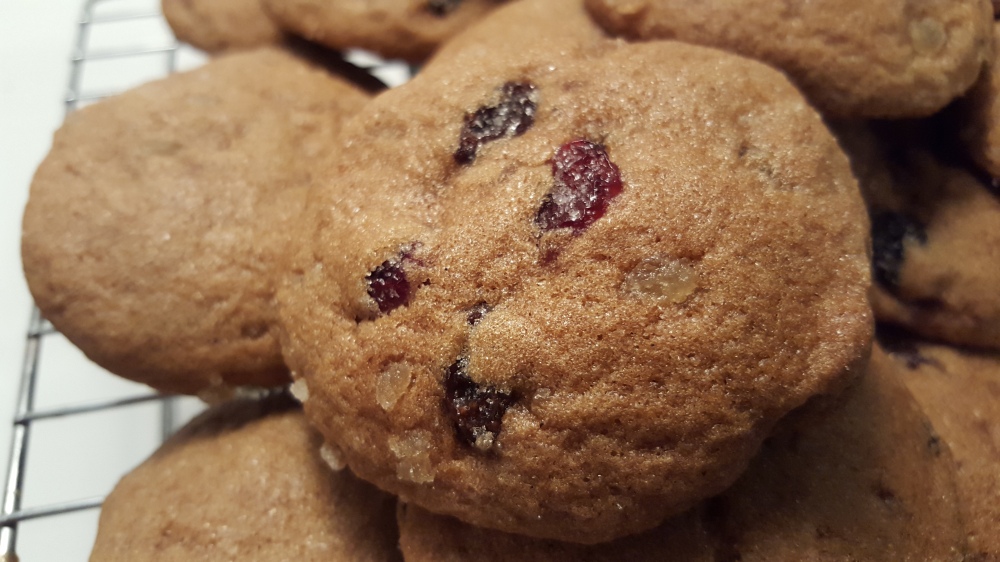 The Medieval Tailor
Adventures in A&S

This is how I spend my quality free time...