Skip to content
I realized recently that the reason I’ve developed so many hobbies and activities in the last couple of years, is because I have all this free time on my hands that used to be devoted to going to university classes at night and working full time during the day.
After ten years of part-time post secondary education, I’d been jonesing for something to capture my interest and stimulate my imagination.
One of the best time wasting investing things I’ve picked up this year has been a return to tabletop role playing games; while I’d originally delved into this world for a short while at the ripe old age of 25 (yes, very late, I know…), the opportunity came around to try it again, with a D&D-offshoot game called Pathfinder. 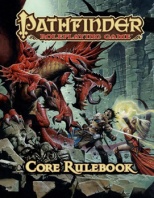 While the three original players who were the most enthused about running this game are now long gone, my hubby, a mutual friend, and I have decided to keep it going anyway. We’ve brought in some new players, we’re learning a lot about the game as we go along, and we’re having a huge amount of fun playing campaigns!
I’m enjoying it so much, in fact, that I’ve decided to join the world Pathfinder Society, and am committing to playing a certain number of games a month at a local game store with other enthusiasts (remember, strangers are just friends you haven’t met yet!).
So yes, I am a “gamer geek”, although not nearly as hardcore as some of my other friends. I just enjoy the imagination, creativity, and sheer lunacy that goes into these games, and I always seem to have a great time.  I’d recommend this to any teens or young adults who are looking for something that gets them out and meeting new people, who don’t judge or look down on you because you’re not wearing the right brand of shoes. In Pathfinder, nobody cares what you look like on the outside; they just want you to bring your funny bone to the table!

Let the ingredient be your inspiration!

Where travel gets weird

Lifesfinewhine
Art at the push of a button

A blog full of humorous and poignant observations.

The Movie My Life

All About Writing and more

Simplifying the transition to a Plant-Based Lifestyle with Recipes, Resources, and Cooking and Travel Tips.

How I Cook — by Graham Stewart

Marvellous Recipes
Wish I Were Here

Journeys Through Place and Time